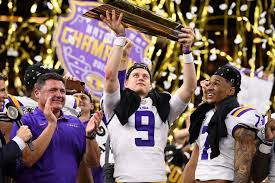 Joe Burrow's historic season ends at No. 1 as LSU surged past Clemson to win the College Football Playoff national title for the first time. And Clemson's winning streak is now over at 29 games in a row. Burrow ended his Heisman-winning season with 463 passing yards and five touchdowns and 58 rushing yards with a score. 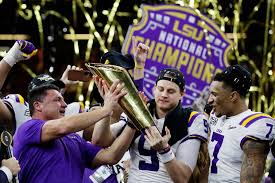 LSU's offense didn't dominate for the entire game. Poor field position and some strong early play by Clemson's defense limited the scoring opportunities early on. Clemson had a 17-7 lead in the second quarter before Burrow finally started to heat up, but once he got rolling, there was no stopping the hottest hand in college football. Burrow connected with wide receiver Ja'Marr Chase for 147 yards in the first half alone, he finished the game with nine catches for 221 yards and two touchdowns, which is a new CFP National Championship record for receiving yards.

If you're wanting to order National Championship Gear CLICK HERE

Congratulations to the LSU TIGERS on being College Football National Champions!!

Sorry, there are no recent results for popular videos.