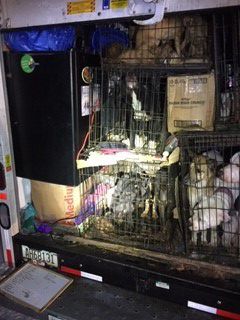 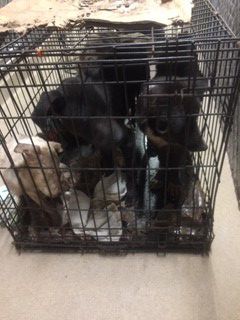 The Rawlins Police Department in Rawlins, WY, reports that on February 15, 2020, Officers responded to a call of a U-Haul parked an Econo Lodge motel for 2 days that was full of dogs. Officers found dozens of animal inside the trailer in extremely unsanitary conditions with obvious signs of neglect as well as several deceased dogs. In total 28 dogs and puppies and 3 cats were rescued from the U-Haul and from inside the motel. All were transported to the Rawlins Animal Shelter to be evaluated by a veterinarian and rehabilitated while the investigation continued.

Jennifer Stracener, 44 of DeRidder, LA, and Christina Fant 42, of DeRidder, LA, said they were taking the dogs 2,000 miles from DeRidder to Oregon because they “had a chance to make money”. It was reported that Stracener has posts on her business page claiming her rescue “Canine's R Us” help local shelters by taking in canines that are going to be put down. Posts back through 2019 attempt to solicit donations of dog food, beds, hay, and travel crates to benefit the animals in her possession. She also claims to be covering the cost of the spay and neuter procedures, and at least one dog’s heart worm treatment.

Christina Fant who was originally charged with 1 count of Misdemeanor Animal Cruelty, will have more charges added.

If you are missing a dog in the DeRidder area and believe it may be in Wyoming, the Rawlins Rochelle Animal Shelter Number is 307-328-4534. Be aware they are very busy and it might take some time for them to return your call.